Democracy is a method or a governing form and needs common values to work. Even more it needs the value discussion for there is no god, gods commandments or a kings saying what to do and where to go. So, a democracy is about learning to deal with values in tension. By doing that, some values are changing, some remain.

This implies that values are a constantly shifting field in need of being reinterpreted based on the present and our current realities, but also based on active participation [is that democracy?] towards envisioning and co-constructing the future.

Can arts and culture indeed be seen as tools and mediators in this ongoing process? In history we have seen how artists were the safe guarders of values as freedom of expression and critical thought. Against the will of some regimes they did uphold European values as openness and discussion. But should this task [sometimes burden] be confined to artists and cultural workers?

Than we also hosted a discussion on the EU as an union of the will. As it is the latest example of a new political entity, and it does lack a narrative. Could that narrative be more than the economical project many people now see in it? Yes, by also returning to that other idea which laid the basis for the EU: a political union. And with politics comes citizens. How could European citizens be more involved? By pursuing the value of participation? That will enable us to prove the values of liberty, equality and fraternity into democracy.  The new experiments in democracy [new municipal movement, technological tools to co-write constitutions] could enable us to make participation more than a word.  Could this also help us Europeans in bridging the gap between the division in society between people [highly educated, well connected, mobile] who prefer so called cosmopolite values and those who do less? Culture for the EU and the EU for Culture

The economic value of culture is not to be denied, but often it’s not sustainable for cities (Barcelona or Venice) or Creators themselves.

EU funded projects have strong impact and EU added values. Examples are EU projects that have lead socio-cultural inclusion, more environmental awareness, and brought communities together through a participatory approach.

The Creative Europe programme has been, and still is, key to the development of the European cultural sector. Yet, the current Commission s priorities are forcing the programme to evolve towards a creative industries approach, increasingly diverging resources towards the for profit end of the CCS spectrum. This is problematic and old fashioned, among other things because it builds solely on the economic dimension increasingly relegating the social and cultural dimension of EU action.

One of the main domains of EU action in the cultural field should be to put the instruments in place to allow cultural practitioners and citizens to join together in partnership with organisations from across Europe, bringing cultures together, learn from each other, form bonds through shared values and projects, and broaden our horizons. Art and culture also allow a different sort of conversation to take place - opening up new ways of communication and understanding.

Access to cultural resources and freedom of practice and creation should be seen as basic citizenship rights.

Participation in the arts is low, hence why do we claim to have a societal impact? But we know from those engaged in the arts that we do. So how do we bridge the gap, policy wise? One proposal is to increasingly blur the line between audiences and cultural practitioners, others?

Arts and creative education needs to be strengthened in all member states. Education (including arts, humanities, …) is needed, amongst others, to counter and detect fake-news and develop critical thinking.

The EU should be taught within the curriculum. Children and youth should learn to speak and express themselves, respect diversity, gender, age, beliefs. Unity in diversity is the core message. An understanding and knowledge should be taught and curiosity kindled in European and international cultures to develop a sense of unity and understanding. Courses in General Culture & Civil Rights and Obligations as well as Social Welfare and Social Cohesion are proposed... ‘so kids don't believe in everything just because they saw it on Facebook and if someone talks about Marshall Plan, they don't imagine it is a marshmallow parade’.
We should be careful in using culture as the only tool and mechanism to solve deeper social issues and structural inequalities. Culture certainly shouldn't be the "tool" but the "means". "Citizens" should be "creators" and vice-versa.

When speaking about Culture in Europe, we must take care to avoid populist buy-in to cultural discourse. However, we should not avoid this debate, but rather shape discourse on ‘culture’ and ‘identity’ in a positive, constructive and reflected manner.

Practice inclusion through and in arts.

Culture can have a massive impact, but this is not recognised by decision-makers

A discussion on the place of languages, particularly English post-Brexit, was inconclusive.

A heated debate on the cultural elements the is the EU founded on resulted in the recognition of the importance of diversity.

Questions on (dis)trust and the role of culture remain open: In a time in which trust in political systems, media and NGOs is decreasing, how can we develop trust with culture? And nourish ‘healthy’ distrust? Culture should not be used to ‘pacify’ in times of unease. 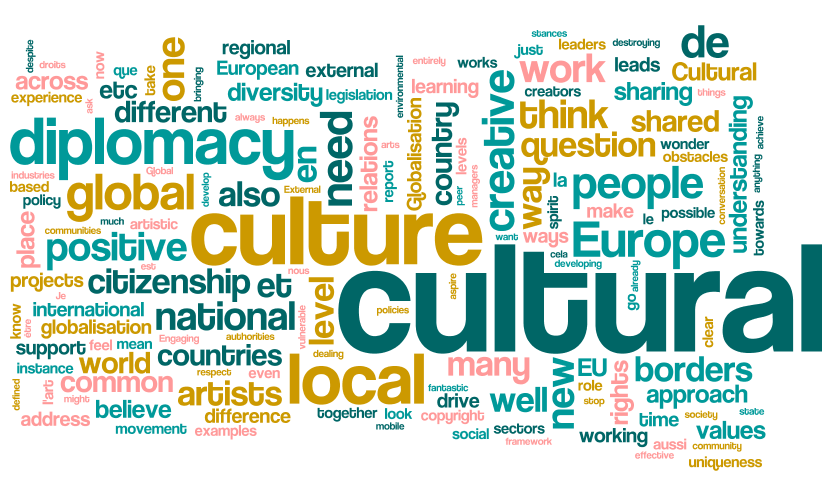 About networks and bridges

The citizens make the bridges worldwide and in doing so constantly challenge the status quo of institutions. Difference becomes a learning process. Values and having the freedom to challenge rules are the key to emancipation. But does the structure have to exist before the emancipation can become reality? Peripheries, peripheral zones, small groups, marginalized, minorities what power do they have ? How can they become new thought leaders ? One major problem is the enormous economic differences that makes developing international cultural policies difficult, particularly for cultural exchange. Moreover, cultural content industries and their power lobbies defy the possible regulatory approach of the EU. What funding mechanisms can address these issues as well as the value of individuals as opposed to larger groups? Is the problem fundamentally structural not context-based ?

Are we moving toward a global cultural citizenship and if so should citizens’ parliaments pop up everywhere ? Networking and cross sectorial thinking are useful tools in this respect. Making sure that mobility is a human right across the planet is essential and shouldn’t advantage the same conference goers.  How representative are we? Independent, creative and without social security

As artist are the role models for neoliberals – independent, creative and with no social security – the cultural sector mirrors the increasing gap between few very rich and many poor. Arts and culture and creative industries often even act as drivers of gentrification in urban scenarios, where quarters get cool and hip, when artists move there.

We discussed innovation as a major trap and the basis of a false notion of never-ending progress and of humans endlessly compeeting with each other for grabbing the most of the finite resources. As arts organizations start to campaign for social security and payment for artistic work, temporary project based work is another major trap in that system.

Automation and digitization of work already confront us with big questions:
How to identify the future models of work that will include a complete revision of the notion of “work” and for which we do not know yet how their monetization will work? What will be the future skills of workers, producers and – why not – consumers? Will they be prosumers? What about new models of collaborative co-creation, social relevance of work and the question of well-being?

In other words: we need new ways of understanding the concepts of 'work', 'the economy' and 'cultural production'. The cultural sector and maybe as well the creative industries might have some ideas already. Nevertheless the acknowledgement of the decisive role of culture and creativity for the future of Europe is still missing and there is a need to seriously invest into cultural research and development that implies the right to fail.